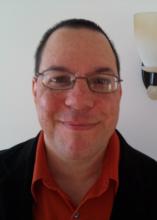 The Self-Determined community lost Shawn Nitz, who passed away on June 11, 2017.

He is survived by Athena Nitz-Lightcap. His joy in life created family members and connection wherever he went. His closest family consists of Lorraine Kinsley and her children, Michael and Kelly.

Shawn’s life served as an example and inspiration to all those that were graced to have known him.

The following story was written by Shawn before he fell ill and tells of his impact on the community which lives on. Shawn is greatly missed.

Growing Up with a Disability: Moving from House to House

I was born in 1972 at Good Samaritan Hospital, and I only weighed 2.5 pounds. I moved on Long Island several times before I was 11 years old. Between the ages of 11 and 16, I lived in Finland with my mom and brother. After this, my mom and brother stayed in Finland and I came to the United States to live with my grandparents. My grandpa died of liver cancer in June 1988, and my grandma later got sick with Alzheimer’s. One of my neighbors took me in when my grandma died, and after a few years, she enrolled me into the state system. For 17 years, I remained in this system of family care, moving from house to house. After some difficult issues with a family care provider, I moved into a group home.

I stayed in a group home for 2 1/2 years, but control issues made group living difficult, and I really wanted to live on my own. I got a supported apartment, where I stayed for a couple of years. Still, I felt like I did not really have a strong voice in this supported system, and I had conflicts with my roommate.

The Self-Determination Difference: Advocating for Myself and Others

Thanks to Consolidated Support Services (CSS)/Self-Determination, I moved into an apartment with a great roommate and I got a new cat, who I named Cinderella. CSS allows me to have a job coach, support broker, Medicaid Service Coordinator, and wonderful direct support professionals for as long as I need them. The members of my staff are also my friends. I am in the process of arranging to move to a new apartment with a new roommate. My new roommate is someone I met through CSS that has become my friend. I are glad I have the freedom to choose where I live and with whom I live. I am also a member of a social group for others in CSS, where we sing our own versions of popular songs.

Learning to Be a Leader: Advocating for Long Islanders with Disabilities

I used to believe that advocacy only meant raising my voice for what I want. As I started participating in advocacy groups, I learned better ways to speak up for myself and others. Now, I am a member of committees, both at work and in my personal life. I speak for those who need a stronger voice, and I have also helped give surveys to find out how we are meeting the needs of people with disabilities.

My committee memberships include Family Support Services, Human Rights, and Incident Review. I learned a lot from my training for the Incident Review Committee. I am also a board member for the PBS Community Foundation and the treasurer of the Self-Advocacy Association of New York State (SANYS) CSS advocacy group called Independent US. Also, as a grass roots presenter with SANYS, I teach about people with disabilities and the many services out there for us. I was very proud to receive the Erwin Schmidtkunz Self-Advocate of the Year Award for Exemplary Advocacy for the Long Island Region of SANYS. It was awarded at the 2013 Long Island SANYS conference and I was very surprised.

I am so grateful to God and to all the wonderful people in my life.